My family had the pleasure to review Box of I.D.E.As WWII - Pearl Harbor the set.
We received a PDF version of the product which can be purchased for $49.00. If you would like a physical product it will cost you $79.00.

Box of I.D.E.As is dedicated to providing creative interactive modules centered around certain subjects. Kids will be drawn into critical thinking and many knowledge building activities through out. Our Pearl Harbor Box included 10 modules(subtopics). The downloadable file included directions and some suggestions on using them as well. This is recommended for ages 9-16. You can use it with multiple kids at once.

Since we received the PDF version first thing I asked my son to do was to create a box to keep all this topic in. Since the name is "Box of I.D.E.As" he needed a box!! I loved what he came up with. 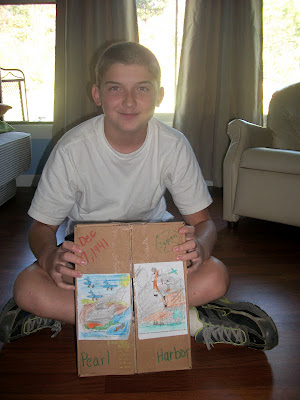 Inside he wrote a Classical Conversations song we learned last year (yes he remembered it) and he sang that song very often while playing in his box. Kyle is a history nut. He enjoys learning about wars, explorers, etc. He said that his favorite thing about this review item was that it was more like a game. I think the reason he felt this way was simply because every module had an activity to back up what was learned. Personally as a parent I loved that he felt this wasn't learning at all!!! He played the games and activities with his smaller brother and sister in the floor many times over and over. He enjoyed this probably more than anything I've seen yet. I do think the price is a little steep but for the enjoyment my child got out of it I would consider getting another topic!

We learned new facts together. We normally worked on this twice a week for about 30 minutes or so however he played the games and done the activities through out the week as he wanted to dig deeper. I'm not very smart in the "historical field" and was really amazed myself at some of the information we learned about Pearl Harbor. We learned that the reason it has the name Pearl Harbor was simply because of the Black Lipped Oysters that lived there in a huge population. Of course Oysters produce the pearls. Hence the name. We learned that sadly the main reason animals are becoming or already extinct is simply because of the products that they offer. Pelts, Pearls. At the beginning of the module there is a quote. We used this for a cursive handwriting activity. The Box of I.D.E.As comes with a summary test however I'm not giving that to him simply because this was something so fun to him I didn't want to change the feeling he had on it.

I did get cracked up at my son on the module Day After The Attack. In this module it talked about the reporting that was being done by news reporters and how those people PRIDED themselves on reporting ONLY the TRUTH! He looked at me and said " mom wonder if there is anyone that really reports the truth in our time?" What a loaded question that was for me to answer. I kinda laughed and then had to get serious and explain that answer. However there are ample opportunities to talk about character and I was glad this came up.

Bottom line - Very easy to use. Print and Go in my case. I loved that this kept Kyle's attention no matter which module it was. In our homeschool we provide games often so this really was our style of learning! The lessons was not overwhelming and just enough material to really learn some interesting facts each module.

The only bad I have to say about this is again I think the price is a little high for whats provided as a PDF. The material is great and again very easy to use. However I'm a homeschool mother(one income) and I'm just afraid that I couldn't spend this amount on a one topic box if it hadn't been provided.

Check out what my fellow crew mates thought about Box of I.D.E.As here.

Disclaimer: I received this review via The TOS Review Crew free for a complete and honest review of the product. This review is my words on their product.