Salem Ridge Press sent The Old Schoolhouse Crew a few different books to review. My family received a softcover copy of Hilda The Briton or The Golden Age: The Story of a Roman Slave Girl.

Salem Ridge Press is a publishing company that was established in 2005. They are dedicated to bringing the very best children's books of the 1800's and early 1900's back to life for the new generation. So far in their journey they have republished 30 titles. All books they publish have sample chapters available for you to read online. Here is the sample chapter of Hilda The Briton.

Hilda the Briton is part of a series called Junior Church History Series from Emma Leslie. There are 5 other titles in this series with hopefully more to come! This series is for the younger child from ages 8 up. This book was originally published in 1874. 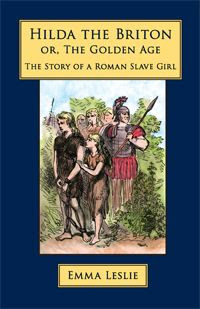 My family used this as a read aloud so I and my 3 children used this book. My children are ages 12, 9 and 8. At first glance I was so happy about this book simply because most of the time my boys have the hero to listen to and not my daughter. I was happy to have Lexi listen about this young girl's journey. The book is 145 pages long and has some pictures throughout the book which is helpful for my more visual boys.

The main characters where Hilda and her brother Bran, They are Britons and the Roman's took them as slaves back to Rome. The story is placed about 63 AD. It was awesome to see the way the slaves where used at this time in history. My family got very concerned when Hilda and Bran got to the slave sale but we were so happy when they got sold together! I personally wasn't sure how the book was going to speak of God because Saturn was such a huge deal in Rome as the God. The kids had lots of questions at this time about some of the God's they worshiped but it was great when things started to turn! The elder slave that took interest in helping the young kids took Hilda to see Paul and I loved this part of the story! Because of course it was Apostle Paul!!  Hilda had so many questions about God and what he was and who he was. I just enjoyed this part best. At the same time my heart is hurt for young Bran, He is so angry at the situation he has been placed in I fear for him.

I can't tell you anymore because you totally need to read it yourself!

My personal thoughts on the book are:

The story was heartfelt and warming. Although the story was sad it had great meaning and character all throughout the book. The point is the parent needs to point these great character deeds out! It was great to learn more of the churches history through this fictional book because while fiction it was true to the facts. We hadn't read any fictional church books so this was a good first for us.

The reading was actually hard for my kids, the English and words where difficult throughout the entire book. Normally for a read aloud in our family we will read a little and pass the book around to the next person but with this book we wasn't able to do so simply because the kids honestly couldn't read it well. Heck I will say this was a hard one for me too! LOL, I'm not above saying it had me flustered here and there!

I loved that the book had footnotes about certain words to explain the meaning example: would fain - desire to. This helped me a lot because of course old English needs some explanation sometimes.