My family has had the pleasure of reviewing The Presidential Game that is targeted at ages 11 and up. My kids love board games. Some of our favorite games are strategy games and this one is no different. This has become a fast favorite that they actually just leave out on the basement table to play over and over. I think that speaks volumes!

The object of this game is to win 270 of the 538 electoral votes to become President.

To begin the game you choose your party and then move on to decide the amount of weeks to play. 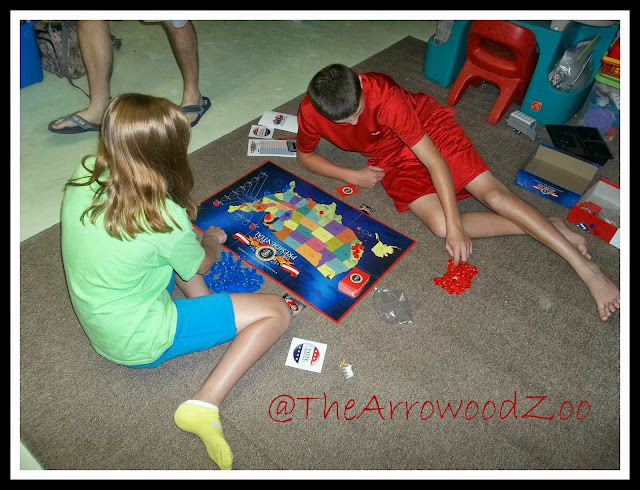 The length of the game varies but within the rules that came with the game it helps you decide how to establish a time frame for each game. Each team agrees on the number of weeks until the election and by that number it sets the time, example a 30 week (30 turns) game lasts about 1 hour. My kids have normally played about 8 weeks and it takes about 30-40 minutes to play each game.

The kids have played anywhere from 30 minutes to 2 hours!!

Each turn you decide on whether your going to Campaign or Fundraise. If you Fundraise there are some rules to it, you must only pick from 4 states and there is a cute way to remember which ones - George Washington's face is on them! 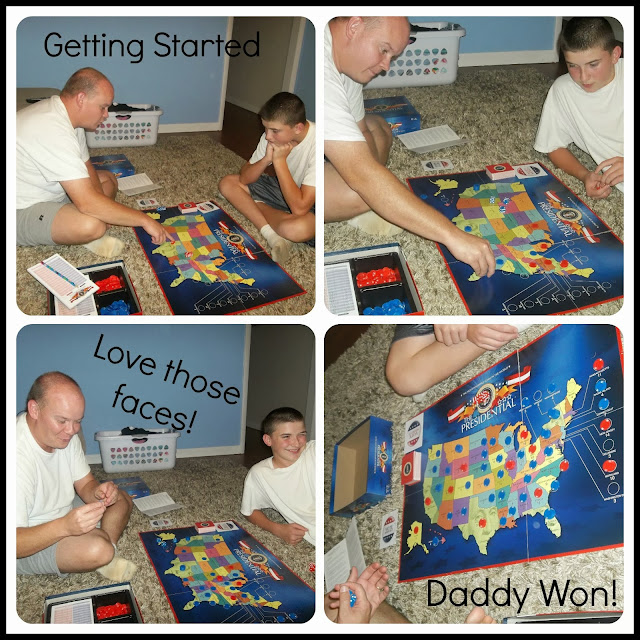 After your Fundraising turn is over you choose a Politics card. It will either help you or hurt you! This is a fun twist! You truly get the real feeling of all the trips and all the judgements and impressions the presidential candidates have to go through with having an election.

Your considered to be stronger than your opponent on fighting terrorism - Add 5 votes to any one state.

Warren Buffet endorses you and lends financial support to your candidacy - Add 1 vote to Nebraska and 5 votes to California.

Your opponent's campaign manager wears a gaudy hat to the Kentucky Derby. She is booed by the crowds. Add 3 votes to Kentucky.

If you Campaign you pick 3 states then roll your dice and whatever you roll you have to use on the 3 states you chose. If you roll a 4, 5 and 1 you have to place all the dice on each of one state. You have to campaign which is a really neat twist to teaching the kids about how to get votes and what the actual presidential candidates have to go through.

Lexi is 10 and Kyle is 13 so they have both challenged each other several times. Daddy has played with Kyle a few times too. He said he was surprised at how much this actually teaches about the real way elections are ran. I actually got confused but I didn't want to include that (lol) but after watching Kevin and Kyle play I got the hang of it. I am one of those hands on learners and I must be involved to learn. Now there is a really awesome feature that the makers of The Presidential Game made just for the game. I have to say the kids had a little trouble adding up on the calculator the electoral votes, which I am sure that was the purpose of this WebMap Calculator! The game comes with a code to this interactive WebMap that shows the states and you keep up with who is in control of the electoral votes and no more headache while your adding up all those numbers. Easy & Smart addition!

All in all this was a great way to educate my kids on the election process while having fun through a game. They also brushed up on their geography along the way too!


Click here to go on over to The Schoolhouse Review Crew Blog and read more reviews.