This week worked out very good! I was so proud of myself for following through with my plans for the most part. We started our year with a new routine and I really love it and the best part is I really think the kids love it too.

We are doing circle time for almost 2 hours every day!! Yikes, but we are getting a lot of stuff done and I think once we review a few more topics we will be able to knock that down to about an hour or an  hour and a half. 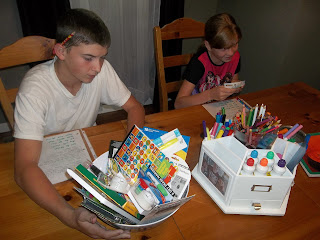 Looking through the new supplies! 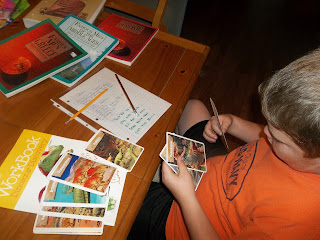 Zachary had some new Dinosaur items.

Monday was the start of a new school year. It went smoothly and I couldn't have asked for anything better. 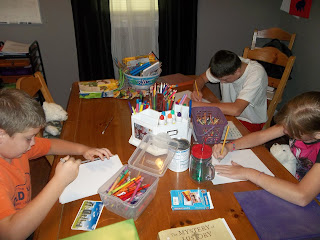 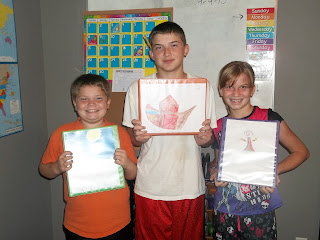 We decorated our Mystery Of History Binders.

Tuesday Daddy was off and we did school while he also did school! The kids are used to getting days off through the week when Daddy is off but since Daddy had school work we did too. One this helped Kevin be able to complete his work in a timely manner because the kids weren't bothering him and being loud and two it helped us to keep a routine early on in the week. 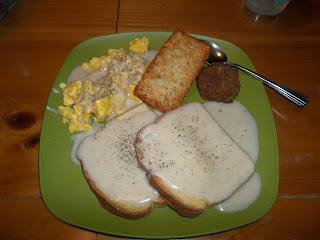 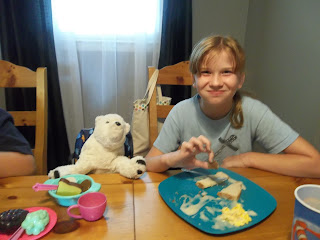 Daddy always fixes breakfast when he's home! We also had a guest for breakfast. 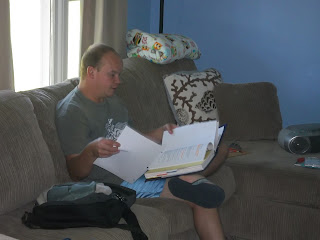 Wednesday Alexis had a play date with a friend at the park after lunch so although we wasn't finished with our day we went ahead and stopped school at lunch time and headed out for some fun. The boys went to Papaw's to shoot bows and ride 4 wheelers. I took Mattie with Lexi and me to the park for our date. They all had a blast however half way through playing guess what it started doing - Raining. The girls didn't mind, they had already been in the creek at the park and since it wasn't storming the other mother and I just allowed them to play. They had a ball however they where nasty and wet! On the ride back to Papaw's Mattie told us that was the best day ever! How's that for pleasing a 4 year old? They just kept talking about how cool the slide was when it turned into a water slide!! 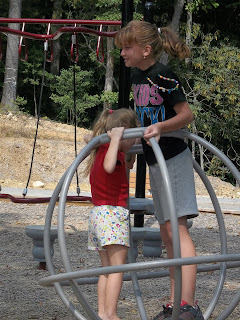 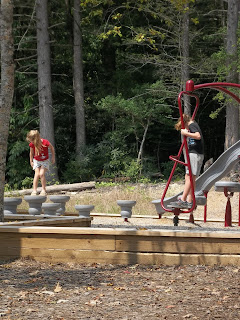 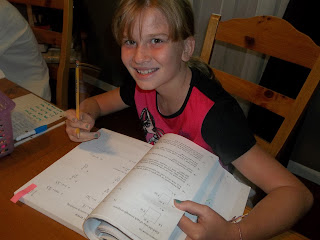 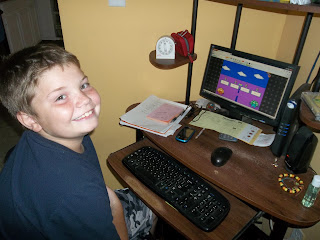 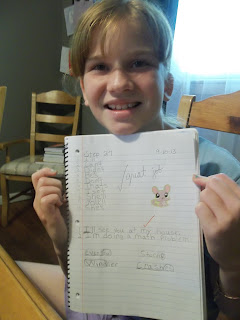 Thursday was a field trip day. We actually didn't know about the field trip until Tuesday but because I am a cool mom I allowed such short notice to allow us a field trip. We had a lot of fun and learned a lot about the history behind the Overmountain Victory Celebration. 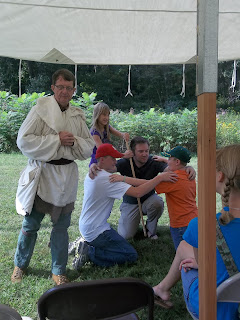 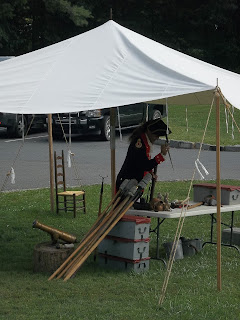 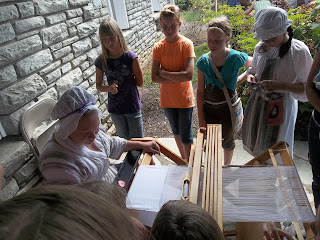 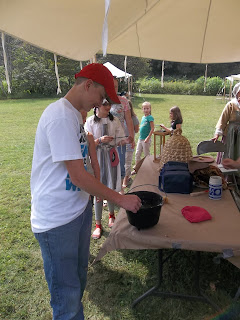 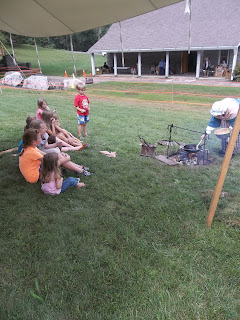 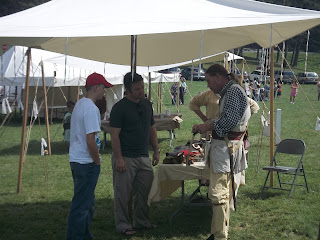 Friday was peaceful all except Zachary early on. He wanted to test me every inch of the way the first 2 hours of our day. I understood this was a busy and hard week for him because he had to get back in routine but I actually had to discipline him this morning which is a huge change. He wouldn't have gotten in trouble if I knew he wasn't able to partake in our circle time but he was just daring me with his actions and actually just said he didn't understand why he had to do what I said... Needless to say that explained why he was in trouble with momma. After that short period of time he was fine. He saw I was going to stand my ground and he wasn't getting his way. 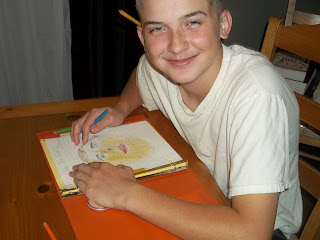 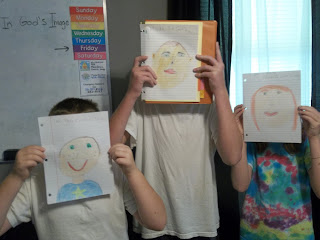 Second lesson in MOH - Learned more about Adam and Eve and made self portraits! 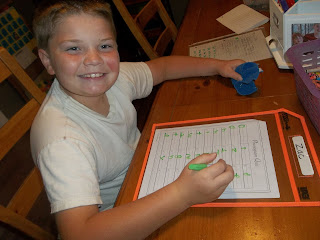 Working on All About Spelling Level 1 phonogram sounds.

Schooling this week has went really great for everyone. Everyone has followed the new routine well. The only item we started this week that is a huge fail is Zachary's math. I was going to try to allow him to do Rod & Staff math until he finished around February and then start him on MUS Beta but that's not going to happen. I feel really good knowing that only one item isn't a good fit!

Almost forgot to mention something new this year that the kiddo's have requested. Several weeks back I had been brainstorming over some new things to add into our day. The kids asked if we could do cooking classes and I said sure. So every week at least once we are going to learn a skill or cook a recipe.

This week we decided since we eat a lot of salads that I would teach the kids how to prepare one. 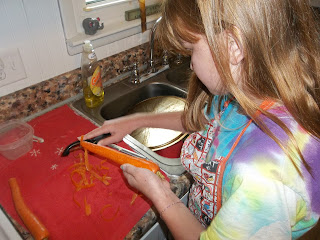 Alexis has never peeled a carrot, so this was a new skill for her. She then cut the carrot to be placed in our salad. Then she learned how to prepare a bell pepper. 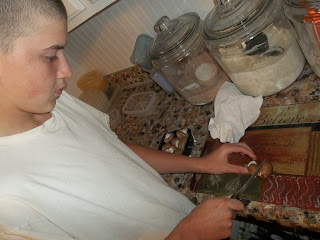 Kyle cleaned and sliced mushrooms and broccoli for our salad. 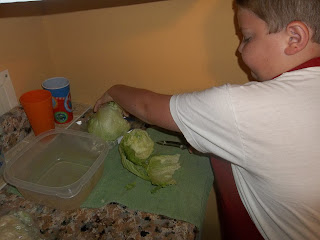 Zachary worked on shredding the lettuce and then moved on to tomatoes.

I hope you have had a blessed week.

This weekend I am finalizing all my Co-Op planning. The coop will start in October and each week is a different country. I have the 6-8 year old class and here are my countries:

Kevin preaches Sunday morning and night so please pray for that. I'm still adjusting to attending churches that aren't my home church and honestly that is the hardest part for me at this point.

I'm trying to find a part time job since I am no longer able to work from home and I wish you would join me in praying for that too!